Class of 2017's Elushika Weerakoon caught up with Class of 2011's Chia-Wei Liu for our latest Alumni Spotlight, who told us all about why he chose the program back in 2009 and his work and experience since graduating.

The MFA Interaction Design program welcomed its first class in 2009. It was — then — still a relatively unexplored field with new concepts, and the first batch of students were the Class of 2011. The "first class" feels like an urban legend to other students and alumni: they came, they learned, and they conquered. I would hear whispers of their names here and there and was always curious about their experience. After all, they were the first.

Similar to any class at MFA Interaction Design: there are the outspoken ones and the quiet ones. Chia-Wei Liu was one of the quiet ones. When I started working at frog, I had no idea he and I graduated from the same program, which is unusual given the close alumni community.

I wanted to take this opportunity to introduce you to Chia-Wei, Class of 2011 and Senior Interaction Designer at frog.

Elushika: First, thanks for taking the time. In your profile from 2009, it says you have an industrial design background. What made you choose SVA to be part of the first class?

Then I did a lot of research on which schools or jobs could provide me with that opportunity. I talked to a friend who graduated from the same college as my undergrad. She went to Carnagie Mellon and at that time she was studying interaction design. So after the conversation, I realized that there was a discipline and program that actually focuses on the interaction between people and objects/products/services. Looking at broad systems to think about the touch points and focus on the details to design for a specific key moment of an experience and it was exactly what I was looking for. Then I started to google interaction design programs around the world.

SVA had very good SEO because this program was the first thing that popped up! That is how I found the program, and honestly I had no idea what to expect. I didn’t really know any instructors in the program. I was just reading the description for each course, and then I thought this was something I really wanted to do. The whole curriculum really fit my interests. I missed a lot of application deadlines and luckily got into three programs. SVA was one of them, and it was my top option.

New York was another deciding factor because I didn’t want to go to a place to learn something and return back to Taiwan. I wanted to have a solid experience in a city, from the culture, to the industry.

E: What were your expectations when you joined the first class?

C: I think no one in the first class knew what to expect. During that time, interaction design was still an unknown discipline. So we wanted (including myself) to do something that focused on human experience. I had no expectations; I just wanted to explore and learn.

E: Can you tell me about your experience in the first semester?

C: Wow, it was six years ago! The first semester was tough — very tough. It was the first time I came to the United States, and I had to learn many things at the same time, not just a new discipline. The culture is different, working with other students/instructors, presenting in front of an audience, research, and a lot of reading. I remember one time I spoke to Liz and she asked me, “How do you feel about the program so far?” And my response was, “Too many readings.” And she said, “It’s normal; it’s graduate school.” Then during winter, many students told her that there was too much reading, and I realized it wasn’t just me.

I almost couldn’t survive the first semester, but Liz helped me. I don’t read, react, or speak fast compared to the other students in the program. So I spent more time preparing, completing my homework, and discussing with other students when we worked on team projects. Another difficult thing during the first semester was that we had many group projects. Since this was a new program and discipline area, no one knew what was the right process and expected outcomes. As a group we would take a lot of time discussing things that didn’t go anywhere. The clock was ticking in the end, and we had to come up with something. It was my first experience working with other people in a team.

Even though it was difficult, it was very exciting because everything was new and nothing was expected. The atmosphere of the program [then] was, “Oh let's try something. Or let’s figure out something together.” There wasn’t anyone who said, “We should do it this way,” or “This is the right away.” I also felt that we were part of the process of improving the IxD program. I remember Liz would send out surveys asking us, “How do you feel about this class and how can we improve?” Being part of that process was pretty interesting and exciting. 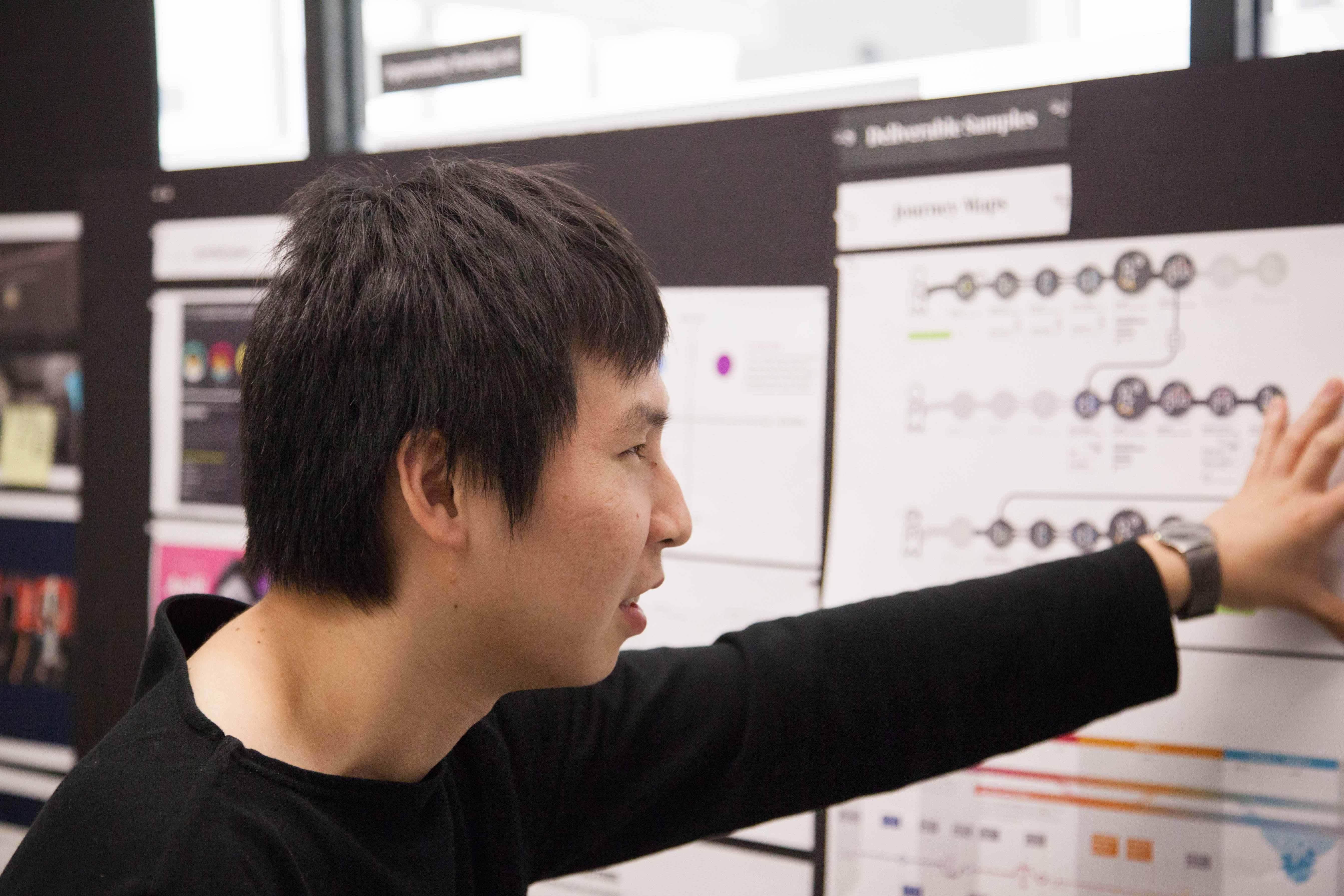 E: What were the design trends during your tenure in school? Do you see any of these trends now?

C: During that time [2009], I remember everything was apps-based. I think the iPhone was released two years before, and [generally out in the world] people were very excited to make apps during that time. Within the program, I noticed some trends that I still see. Today, we talk a lot about how we design for behavior. This thinking was relatively new during that time. For example, to design something that would help people be healthier or stop a habit.

We had many classes that explored how can we design not just a digital experience, but also a physical companion that can really help you to track your behavior and receive feedback to improve yourself. This area is really popular right now in the healthcare industry. Stakeholders in healthcare are looking at the user's behavior, not how many users downloaded the app.

The other trend is how can we design something to facilitate a conversation between people and bring awareness of the subject matter; such as cities, communities, and environments. We had a class called, "Public Interfaces" where we were constantly exploring on how do we actually put something in an open space so that people can interact with it and each other.

E: I saw your thesis called Secret Mission, what made you want to create an app for kids?

C: We had a Thesis Preparation class (I think Liz was teaching it at the time) and Liz asked us to think about “what mattered to us the most” — what were the things we wanted to change and what problem we wanted to solve. When I was thinking what mattered to me, I wanted to design something that would help people understand each other; people from different cultures or very close loved ones will have conflicts. How could they better communicate and share their feelings? It was something I wanted to do, but it was a very broad topic. Communication and emotional sharing are tough, so I decided to do something between kids and their parents. In order to have a good relationship, open communication needs to start at a very young age. I was thinking if there is something that they can do together to develop that communication habit, then maybe in the future they will not be shy asking for help or sharing their feelings.

E: Did you continue to work on your thesis after graduation?

C: No, I didn’t. Should I have? Maybe. Do I regret it? Maybe. I say "maybe" because the first few years after I graduated I was thinking, “yeah I really should continue. This shouldn’t be just a presentation." But after a year, I changed my mind. When people asked what my thesis was, I would tell them it was a process that helped me figure out what was most important to me and what problems I wanted to solve. It is not just one product or service that I created at that time. It is something I will continue to explore throughout my career. As long as that project helped me to reach a certain understanding then that was a successful project.

I was also too busy, I had to find a job right after graduation. This topic is still in my mind and I might do something in the future that might be related, but not the same thing.

E: What did you do after graduation?

C: I was looking for a job. A lot of things were happening during that time for international students. I could only stay in the United States for another year with OPT [(Optional Practical Training) as an international student], so there was pressure for me to find a job very quickly. I talk to many people, and I joined Meetups. I don’t normally do those things, but I had to. I still don’t like to that, but it was helpful. Job searching is not sitting in front of the computer and applying for something. I had to go and meet people.

During that time I saw a job opening at frog’s website. I emailed Josh [Musick], faculty at SVA. There was a position called "Interaction Designer II," and I wasn’t sure of my qualifications. They still told me to come in for an interview. They said that there was an internship position and asked me if I would consider it. I said yes. I was looking for whatever opportunity, and I was going to try anything. I have been working at frog for five years.

E: After graduation and seeing where you are, do you think this program was worth with?

C: I think so. Yes. Being in the first class, I didn’t expect too much. I wanted to have an opportunity to get into this new area and connect with experts in the field practicing interaction design in the industry for years. All of this came true; it worked for me. Another thing is the structure of the program. We learned from leaders in the design industry in most of our classes, and it wasn’t "read this" or "do this." The instructors were bringing in the problems they were trying to solve in their day-to-day and projects they were working on. It gave me a chance to be exposed, and I felt like an interaction designer. The topics and thinking process, collaborating with others were very similar to when I interned at frog. It helped me to be in this career, so yes it was worth it. 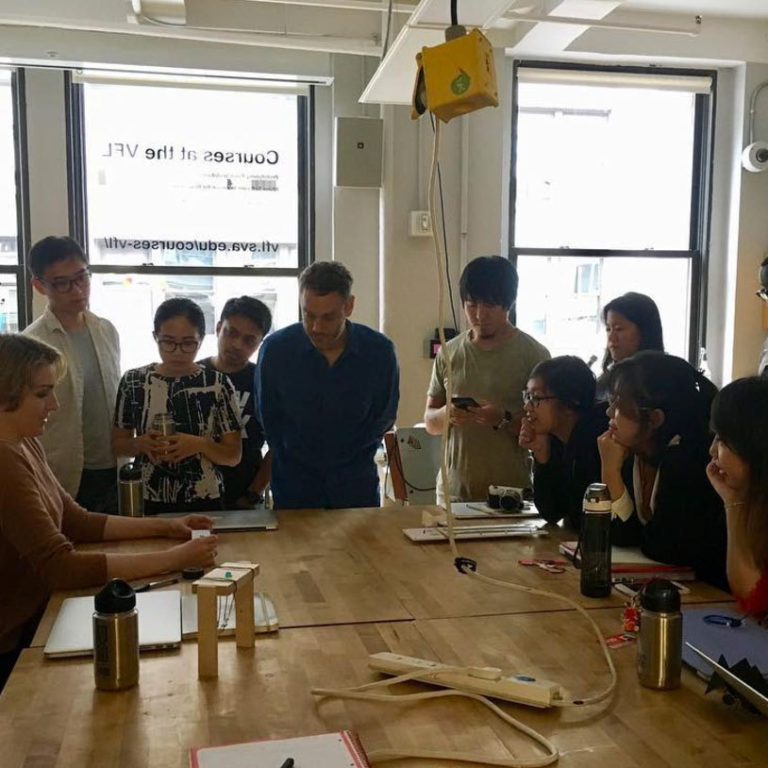 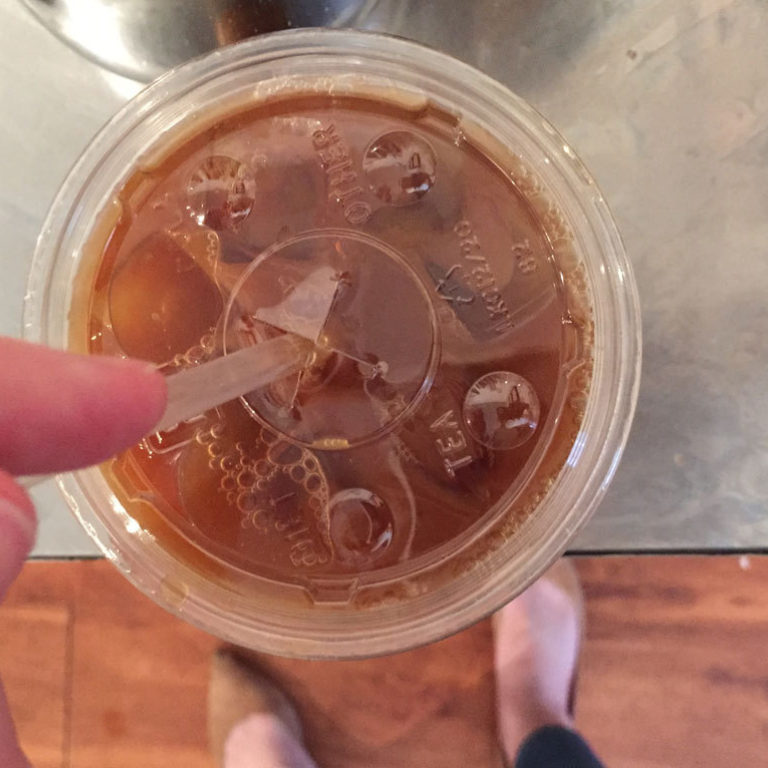